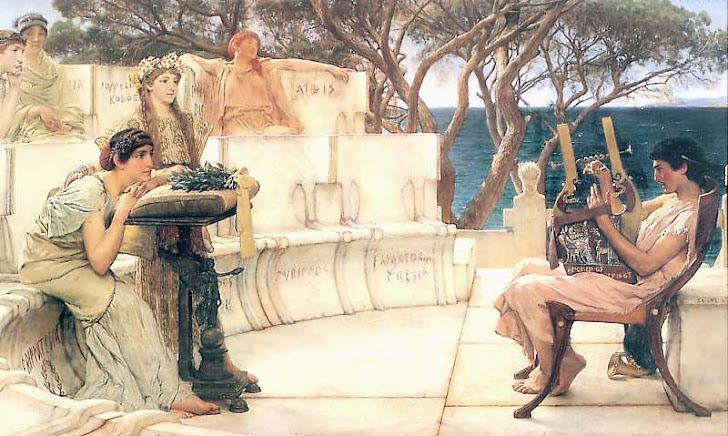 I chose to situate this conversation at a time when women were experiencing unprecedented levels of cultural rhetorical power, at least in my lifetime, in my everyday experience of the world.

When I  first read Scudery, I couldn't help but think back to when I came of age, and about how similar conversations played out. The 1980s was an exceptional time for women. They were rising to positions of power in unprecedented numbers. In 1984 the first female, Geraldine Ferrero, ran for vice president. In Austin, when I was an undergraduate at UT Austin, the school's president was a woman. The mayor of Austin at the time was a woman. When I went to work as an arts and entertainment writer for Austin's only daily newspaper, my immediate editor was a woman, the editor over her was a woman, and the editor of the entire paper was a woman.

Like the ladies that depicted in Scudery's era, our conversations about to how to balance our private and public lives concerned us at a level deeper than that which we believed applied to men. Moreover, though women had made some significant strides, there still was the unnerving and unjust sense that women's work just wasn't taken as "seriously" as men's.

These changes were seen in the world of rock music at the time. Female rockers were center stage as lead guitarists, drummers and, in the case of Madonna, signified the convergence of pop music and dance at the advent of the MTV era. Of all the writers at the daily newspapers who covered Austin burgeoning music scene, I was the only one who was female -- and it seemed, the only one interested in covering female rock artists. When my editor learned that Madonna's first show in Austin -- part of her first American tour, ever -- had sold out, I was the only writer interested in the assignment. 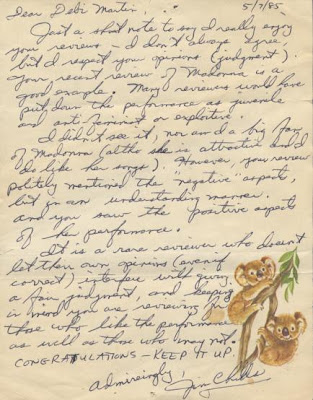 Handwritten letter from a fan who liked my review of Madonna's Austin concert.

1. Be witty and urbane
2. Harmony is favored over discord
3. Eloquence should appear natural not contrived
4. Conflicting viewpoints are handled graciously with "Complaisance," a virtue that enables its possessor to remain affable while managing and containing disputes
5. No one monopolizes the conversation
6. No one should remain silent, and each participant's contribution should be roughly equal
7. One's style and content should be chosen with an eye to the occasion
8. Don't talk about your love life all the time, that includes your kids

WHAT: Imagined rhetorical discourse in a conversational salon during which Scudery attempts to lead a group of women not used to following

WHY: Because of the compelling possibilities of what these ladies might say to each other

WHERE: An imagined digital space anytime, anywhere, a place that looks a lot like Enchanted Rock near Austin if we wore togas with Spanx underneath as we took in the view of a nearby lake (refer to title photo above)